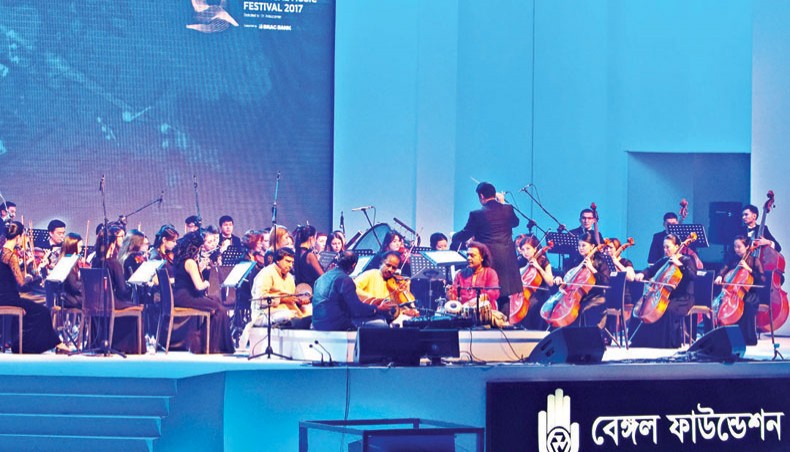 L Subramaniam, a forerunner of the South Indian classical Carnatic music with experiences of playing and composing western classic music, presented Shantipriya, his own composition, with the Astana Symphony Philharmonic Orchestra.

The piece, as the title of composition suggests, was soft, soothing and evoked a sense of peace and calmness on the minds of hundreds of audience present at the show.

The violinist, however, opened the five-day classical fiesta with presentation of raga abhogi, which he said, combines North Indian and South Indian classical styles.

The viloin maestro was accompanied by Tonmoy Sen on tabla, Satya Sai on morsing and Sri Ramamurti on mridangam.

Artistes of Astana Symphony Philharmonic Orchestra also presented around ten sonatas composed by Kazakh and western composers like Beethoven, Tchaikovsky and others to the delight of the audience.

‘It was a nice experience to listen to such a beautiful orchestra and to the legendary violinist’, said Joyanta Kumar Saha, a classical music lover.

The five-day Bengal Classical Music Festival, one of the biggest music festivals in the world, has been organised by Bengal Foundation at Abahani Limited’s playground in Dhanmondi. It will feature around 250 classical artistes.

The festival has been dedicated to Dr Anisuzzaman.

Moreover, students of Government Music College and Bengal Parampara Sangeetalay will also perform at the festival.