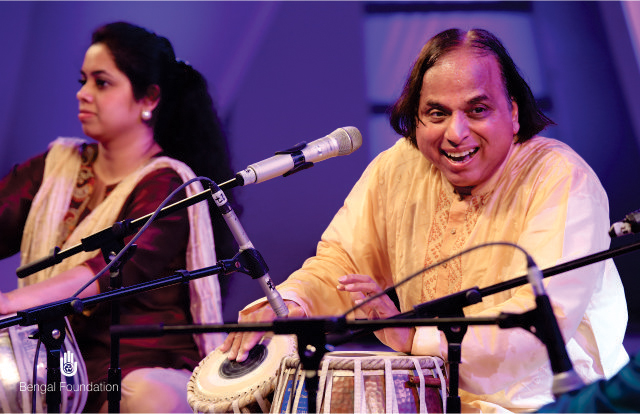 Suresh Talwalkar is a renowned Indian tabla artist. He studied the rhythm theory of Carnatic music and Hindustani Classical singing. He began his training under the guidance of his father, Dattatrey Talwalkar, and continued his musical education from Pandit Pandharinath Nageshkar, Pandit Vinayakrao Ghangrekar and Pandit Ramnad Ishwaran. Talwalkar’s style draws from several gharanas and he has been known to perform with numerous distinguished musicians – he has shared the stage with sarangi artist Pandit Ram Narayan, and classical vocalist Pandit Ulhas Kashalkar on numerous occasions. He performed at numerous prestigious shows in India and around the world. Talwalkar is the recipient of numerous awards including the Padma Shree, Pandit Vishnu Digambar Paluskar, All India Radio Award, and the Sangeet Natak Akademi Award, to name a few. He is also a Guru at the Bengal Parampara Sangeetalay in Dhaka.