Swaying to the symphonies

For the last four years, the final Thursday of November has marked a special occasion. The festival that began in 2012 with anticipation and cynicism — of whether the Bangladeshi audience was ready for the highest form of classical music, in a stadium setting, spanning all night — has dispelled all doubts to become the biggest event of classical music in the world.

The fifth edition of the Bengal Classical Music Festival opened in the capital last night, as Dhaka braced itself for unforgettable performances by the world’s biggest stars of Indian Classical Music. 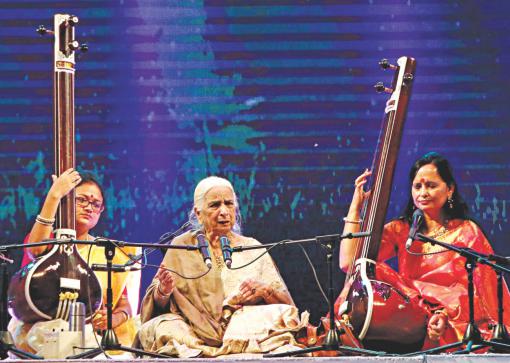 A flute and violin jugalbandi performance followed, by two festival debutants — accomplished flautist Pravin Godkhindi and violinist Ratish Tagde. Their performance of the melancholic Maru Bihag and the melodious, uplifting Hansadhwani set the mood for the audience.

“Some 80% of the audience at this festival comprises the youth, and that is a bright sign for Bangladesh’s future,” Muhith said in his address.

The festival’s senior-most artiste this year, the iconic 87-year old Vidushi Girija Devi then performed a khyal in Raga Jogkauns, followed by a romantic thumri on Mishra Khamaj, and a tappa from Punjab, in her signature style.

Ustad Aashish Khan, the son of the legendary Ustad Ali Akbar Khan, gave his first performance at his ancestral homeland on the sarod.