The Asian Age: The whole world is in a restless situation today. There is a lack of practice of classical music. Traditional and cultural practices are almost absent at present.

When I had seen you playing Sarod last night, I saw the audiences were overwhelmed. I would not have experienced that if I was not present there. How practicing classical music can help overcome this phenomenon? You and your family belong to Bangladesh especially Brahmanbaria. Do you have any memories from there?

Aashish Khan: The recent mayhem across the world is very heartbreaking. There is no doubt that people can heal their mental pain with music. Practicing music should get priority for building peace in our society. Terrorism is a global curse. Music is a very good medium of keeping communal harmony.

I always recall my sweet memories in Bangladesh. My cousins live at Brahmanbaria in Bangladesh. My grandfather last came here in 1959. Our Brahmanbaria’s house was a fort of the then landlord of Brahmanbaria who gifted the palace to my grandfather (Ustaad Alauddin Khan). I was very young then. There was a large pond beside that house. I was used to visiting the ‘Akhada’ where my ‘Dadu’ Aftabuddin Fakir used to practice music. I heard that the locals are misusing the place which is a matter of sorrow.

The Asian Age: You must have observed that some terror activities have risen in our country as well as in the other Asian countries. Recently, some attackers vandalized some temples and musical centers. They even attacked Ustaad Alauddin Khan Music Academy in Brahmanbaria. What is your feeling after such incidents? 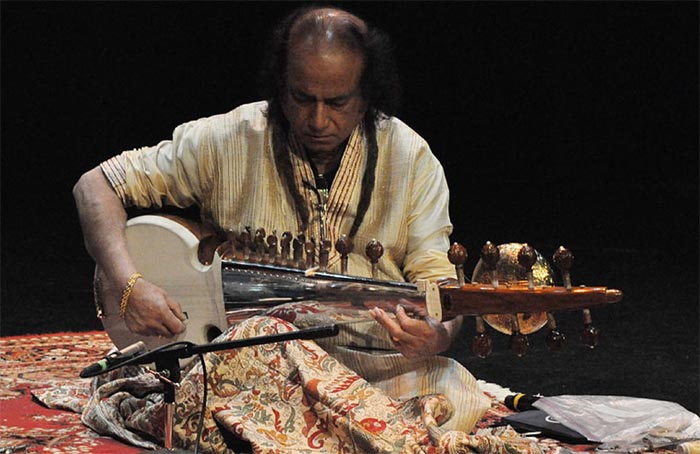 Aashish Khan: Such terror acts in the name of religion is unexpected and sorrowful. Islam is a religion of peace. In America, I have seen that the image of Muslims is getting worse. There are a lot of Muslim haters over there.

The terrorists are misinterpreting Islam. Especially the attackers of Nasirnagar who have destroyed my grandfather’s music academy made a great loss for the next generation.

The academy was like a museum to the next generation. They are criminals who destroyed the traditional musical instruments and academy. The academy is a matter of pride. Our roots belong to Brahmanbaria. The incident is very unfortunate. It’s definitely a crime.

The Asian Age: You are living in California now. There is a lot of patronization from the government in western countries. Do you have any suggestions to Bangladesh government for the development of classical music?

Aashish Khan: Music can be compulsory in school-level education. Music is the root of eternal peace. Music sense is very essential for everyone. One should learn music to understand the inner harmony of music. I believe music is the best therapy no matter whether you become a professional musician or not.

In America, music is compulsory at schools after a certain level. They form bands. For example, one of my brothers learnt music from his school in US. He mingled with a band in his school life. He started with playing flute and then trumpet. Now he is a professional musician and teacher of music and graphic arts. He is very talented and successful in his musical life.

The Asian Age: Well, you are the first fellow from South Asia in Cultural Academy of London, England. Surely, it is a great achievement and a matter of pride and dignity. You must have experienced the excellent musical environment and warm welcome from the academy.

After getting the honor, do you feel that there should be any institution like this for SAARC countries so that we can honor the talented and deserving artists? SAARC has got a business body and I am a member of that. Do you think that there should be such platform for music as well?

Aashish Khan: Of course, it is very much needed. I totally agree with you. Even in South Asia, we can arrange award giving ceremony to inspire and recognize quality musical masterpieces. Moreover, the artists who are now unable to perform should get stipend. Several artists struggle at the fag end of their lives. They struggle to manage their medical costs. These things should be focused.

The Asian Age family is planning to arrange such award to honor talented musicians. We wish you will be a part and parcel of the process. What’s your approach to such awards?

Aashish Khan: I really appreciate your idea. It is a matter of great honor for me, my grandfather and my family. I will happily cooperate with such programs. I am always there for any good purpose.

The Asian Age: We eagerly expect your presence in the very first award program. We are also planning to invite the head of the government and concerned ministers. Will you be able to attend?
Aashish Khan: Of course, why not? I will surely be there.

The Asian Age: It is mentionable that there is a plenty of militant groups including Taliban in Iraq and Syria. Iraq is well-known for age-old traditions and culture. But the militants have almost destroyed its traditional and cultural heritage sites. Not only in these countries but also the other countries of the world are facing such threat. What is your message against those destructions?

Aashish Khan: Art, paintings, sculptures and cultural heritage are assets and guidelines for the future generations. Destroying those pieces of art rather preserving those is heinous. They are nothing but criminals. Destroying art and culture is almost same as killing people.

The Asian Age: I know that you are busy with music and much other stuff. But do you feel for Brahmanbaria or Shibpur? People over there are very enthusiastic to see you. What is your feeling to the people of Brahmanbaria?
Aashish Khan: I planned to go this time but I am afraid I won’t be able to make my way there due to lack of time. But I really miss the people and the place. I am really grateful to them who gave me and my family so much love and blessings. I am so overwhelmed with the warm welcome of the people of Brahmanbaria.

Aashish Khan: I am afraid, I have not got any. There is a possibility to restore those songs. I think Shahin Bhai, my cousin, might have got some copies of those songs. He lives here.

The Asian Age: How have you experienced Dhaka?
Aashish Khan: Dhaka looks much greener and cleaner than the previous times. It seems that Dhaka is getting pollution-free day by day.

The Asian Age: You must have worked with several music legends and celebrities. Would you mind mentioning some of their names?

Aashish Khan: George Harrison was one of the closest friends of mine I have worked with. We have some recordings together. Rock musician Eric Clapton, Ringo Starr, Jazz musician Charles Lloyd, John Handy and some other famous singers and musicians were very close to me.

Nowadays, I am working with Jazz music. Hopefully, I will be able to release a CD by next year. I introduced blending Eastern and Western songs for the very first time. I am a kind of pioneer in this arena. My group’s name was ‘Shanti’. The group was based on ‘Rock n Roll’ and Jazz. Still people are fond of this form of music and the CDs and VCDs were re-launched in US. My new album ‘Jazz Beyond’ will be released by next year. I have blended our traditional music with Jazz. It’s a new experiment. Let’s see how it works.

The Asian Age: George Harrison was your friend. He sang a song titled – ‘Bangladesh’ during the Liberation War of 1971 at ‘Concert for Bangladesh’ in Madison Square Garden of New York. The concert was organized to raise international awareness and fund relief efforts for refugees from the then East Pakistan. Do you think George Harrison felt in the same way as you think?

Aashish Khan: There is no doubt that George Harrison had a great personality. He agreed to do the concert for Bangladesh without any hesitation when Ravi Shankar proposed him to do so. He requested to all his band members to arrange the show. Even he donated the earned money from the concert to the charitable organizations for aiding the war-torn helpless people of Bangladesh.

Aashish Khan: Of course, I will. It would be easier if any organization comes forward to host such programs. It is tough to implement the concert by myself.

The Asian Age: If you cooperate then The Asian Age family is keen to organize a concert like this. Will you be with that program?

Aashish Khan: Yes, surely. It would be great then.

The Asian Age: Thank you very much for your time. We wish you a good health. May you and your music enrich us more and more. Any message for The Asian Age readers, sir?

The Asian Age: Thank you very much.

Aashish Khan: You are welcome.

The interviewer,
M Shoeb Chowdhury is Chairman of The Asian Age, writer and Columnist, Director of FBCCI, Honorary Consul of Malta.