Ranjani and Gayatri, the supremely gifted Carnnatic vocalist duo gave their first performance on Bangladeshi soil on the fourth night of the Bengal Classical Music Fest, and became instant sweethearts of the Dhaka audience with their melodious performance. This correspondent sneaked into the back-stage for a conversation with the sisters after the performance.

You both started off performing on violin duo, and you were an acclaimed violin duo. How and why did you switch to vocal music, and do you still perform the violin on stage? 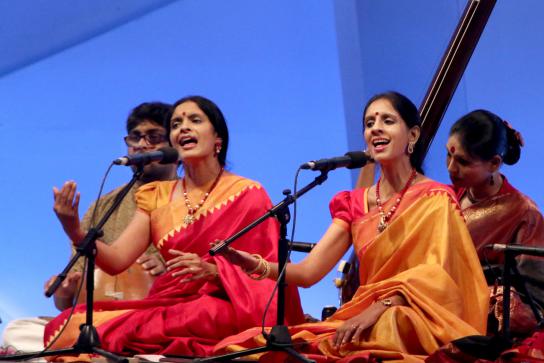 Ranjani: We started performing at a very young age, when I was 13 and Gayatri was 10 – at an age when we had no fear of the stage. We just went and played, and our first concert was incidentally very well covered on Times of India. We have performed internationally also on the violin. When we came under the tutelage of Shri PS Narayanaswamy, who is our vocal guru — the very first time he heard us, he said how come you took the violin when you have such good voices? Usually they say, at least in South India, that if you do not have a good voice, you take on an instrument (laughs). We were very hesitant to do something new, because by then we had become very busy as performers, accompanying front-ranking artistes. But he insisted and we began singing, and people started loving our vocals more than the violin, and it so happened …

Gayatri: … that the violin took a back seat. Violin is our first love. It was the door through which we entered the field of music. So we can never forget it. Once in a while we give violin concerts, and we enjoy the experience.

I’ve read about your prodigious understanding of music at a young age. Did it come very naturally? Do you remember how it was when you were very young?

Ranjani: Gayatri was born that way. There are certain things you can’t explain: why at the age of two when a girl cannot properly speak, she can identify hundreds of ragas? We were brought up in an environment where we were constantly listening to classical music doyens of those times. We started doing complex ragam tanam pallavis, different rhythmic practices…

Gayatri: When Ranjani was 6-7 years, we used to go to concerts, and the musician would sing a complex pallavi; my father would draw her aside then and there and ask her to handle it in all its variations. She used to do it, and people used to cluster around us after the concert. Two things are very important in classical music. One is that — this is a gift. It’s what we call a “Purnajanmavasana” (desire from a previous life). The journey of the soul is a continuous one; you may shed your body, but the experiences stay with you. And I feel the gift of music, and not just performing music — even for appreciating music you must have Saraswati inside you. Second thing is environment. Music cannot be taught inside a classroom; you parents and family have to have that knack.

There’s a famous story of Pt. Ravi Shankar once arranging a concert for you. How was that experience for you?

Ranjani: He had heard us randomly on Youtube, a performance we did at a music festival. He was so impressed that he called us and said, “I want to listen to you live, again.” There’s this festival he conducted at his auditorium at his foundation in Delhi. We were very fortunate that he was there.

Gayatri: He was in fact very unwell, but he sat through the entire performance…

Ranjani: … and at the end he gave us a standing ovation for 10 minutes, which is something we will never forget. It’s a blessing.