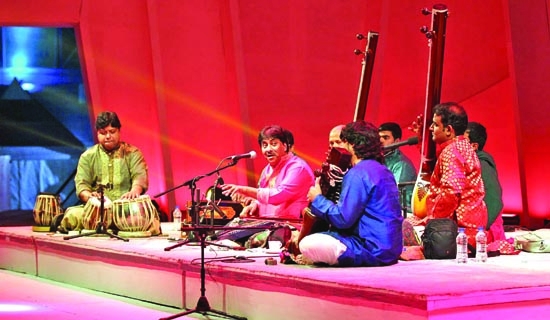 Third night (on Saturday) of classical music has been vivid for the music lovers with number of great artists performed on the stage.  The first performance was on sarod by students of Bengal Parampara Sangeetalay, a Dhaka based music organization.  They played a composition on Raga Kafi.  Later, artist Hashem Khan handed over the crest to the 7-year old Ishra Fuljhuri Khan, the youngest artistes of this year’s festival.

The second performance of the night was a beguiling Carnatic flute rendition by Shashank Subramanyam. He performed Raga Poorvikalyani, a raga locally known as Puriya Kalyan. His mesmerizing performance ended with melodious traditional compositions. Architect Kashef Mahboob Chowdhury handed over the crest to the artistes. The third performance of the night was by Dr. Prabha Atre. She performed Khayal in Raga Shaym Kalyan and Raga Madhurokosh. Madhurokosh is her own creation. After that she performed Dadra Nayki in Raga Kanada. Chetna Banawat accompanied her on the vocals. In the end, she performed Bhajan in Raga Bhairavi.  At the end of the performance, actress Ferdousi Majumdar handed over the crest to performing artiste.

The fourth performance, tabla recital by Pundit Anindo Chatterjee was his son Anubrata Chatterjee accompaied him. The artistes received crests from AKM Mozammel Haque, Honorable Minister for Liberation War Affairs.  The three other performances of the night are Dhrupad by Pundit Uday Bhawalkar. The crest was handed over by Assaduzzaman Nur MP, Honorable Minister of Cultural Affairs  Sitar by Pt Sanjoy Bandopadhyay and last performer was most popular classical musician of his time Ustad Rashid Khan. First he performed Kheyal and than the famous thumri “Yaad pya ki Aye, hai.”