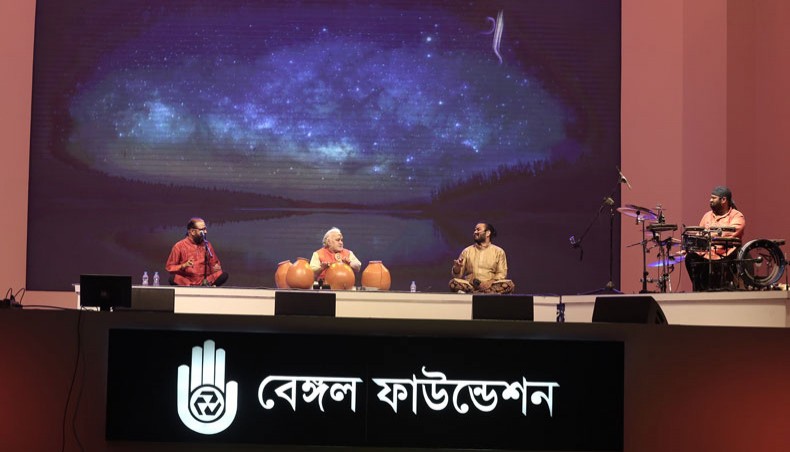 Grammy award–winning Indian percussionist Vidwan Vikku Vinayakram left a lasting impression on the minds of the Dhaka audience with his captivating performance on ghatam, a clay pot, on the third night of Bengal Classical Music Festival at Abahani Limited’s Playground at Dhanmondi in the capital.
The veteran artiste was joined by his son Selvaganesh Vinayakram and grandson Swaminatha on kanjeera and by A Ganeshan on morsing.
Vidwan Vikku Vinayakram commenced his performance with shiv tandav, which expresses the power and beauty of lord Shiva. Vinayakram also presented ganapati tala to the delight of Dhaka audience.
Third night of the ongoing Bengal Classical Music Festival, organised by Bengal Foundation for the sixth consecutive year, also offered an array of enthralling vocal and instrumental recitals by local and Indian maestros.
The third night opened with a sitar orchestra by students of Bengal Parampara Sangeetalaya. The orchestra presented raga kirwani.
Students of Government Music College in chorus presented a khayal based on raga malkaush. Young Indian sarod player Abir Hossain presented a recital of raga abhogi on sarod.
Local eminent flautist Gazi Abdul Hakim captivated the audience with his alluring flute recital. The flautist commenced his recital with melodius raga desh. Hakim went on to perform the peaceful raga pilu and concluded his performance with a few dhuns.
With presentation of raga maru and raga tilang, which are respectively associated with the Sikh and the Sufi music styles, Uday Bhawalkar cast a spell on the audience.
The penultimate performance on violin by Vidushi Kala Ramnath began in the late night. Accompanied by pandit Yogesh Shamsi on tabla, Kala Ramanath commenced his performance with raga nat bhairav. A raga of the bhairav thaat, nat bhairav spread the feel of heroic exuberance combined with pathos.
Ramnath ended her hour-long performance with a short recital of raga basant.
Pandit Ajoy Chakrabarty took the stage to end the night with his captivating khayal. Chakrabarty commenced with raga gunkali, a raga of the bhairav thaat. Chakrabarty’s improvisations on the devotional raga were a joy to listen to for thousands.
Chakrabarty then presented a Bangla song Banshi Baje based on raga jogiya, another raga of bhairav thaat. The maestro ended his performance with a bhajan.