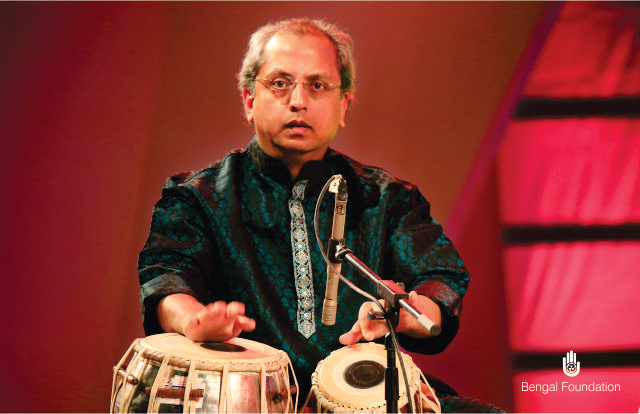 Yogesh Samsi is a distinguished tabla player from India. He is the son of the renowned vocalist Pandit Dinkar Kaikini and began his initial training under his guidance. He later schooled under Pandit H Taranath Rao, but it was under the tutelage of the legendary Ustad Alla Rakha that Samsi matured into a notable musician. He has performed with many renowned instrumentalists, vocalists and dancers, including Ustad Alla Rakha, Ustad Zakir Hussain, Ustad Vilayat Khan, Pandit Dinkar Kaikini, Pandit Bhimsen Joshi, Pandit Shivkumar Sharma, Pandit Hariprasad Chaurasia, Ken Zuckerman and Pandit Birju Maharaj. Samsi has performed at numerous memorable solo performances in India and abroad and is also a highly respected teacher – creating a syllabus for learning tabla designed specifically for teachers in the West, an initiative which can greatly benefit the advancement of tabla worldwide. He has a sound scholastic approach to the subject and has conducted several successful workshops in world music centres in India, United States, United Kingdom, South Africa and Japan.