Young artistes are not interested in sitar: Firoz Khan 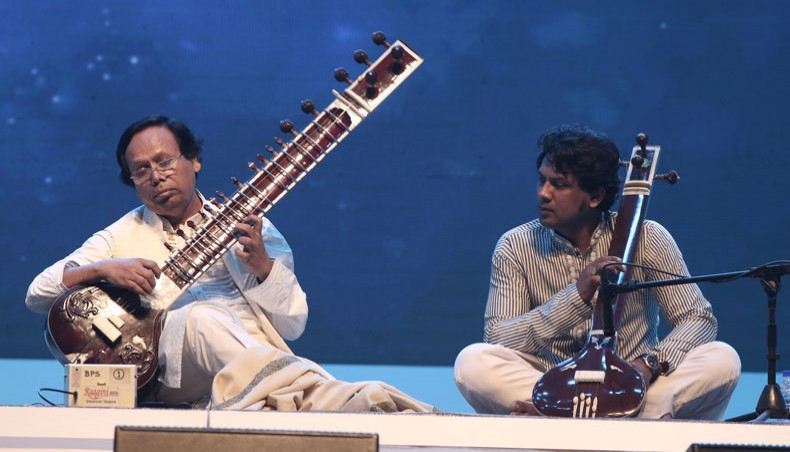 Young artistes do not show interest in sitar fearing lack of career prospects, said noted sitar player Firoz Khan.
In an interview with New Age, the artiste shared his observations on the state of classical music in the country, his journey into classical music and others.
‘I do not blame the young artistes who shows apathy towards playing sitar as there is almost no career prospects’, said Firoz Khan.
‘There is little patronage for classical music in our country. Not many classical programmes are held here so one cannot earn a decent living by doing classical music,’ said the sitarist, who performed at the sixth edition of Bengal Classical Music Festival for the first time.
Firoz Khan’s 45-minute recitals of raga jhinjhoti and a dhun at the festival left a lasting impression on the minds of the audience.
‘The festival gave me the opportunity to perform before such a huge crowd and many renowned musicians’, said Firoz Khan, who thinks that more classical music programmes and festivals should organised in the country to encourage young artistes.
‘When my sons see that I earn my living by performing at commercial shows they do not feel encouraged to pursue classical music and I cannot force them either’, shared the sitarist, who now works as a music director at Bangladesh Betar.
Only Bangladesh Television and Bangladesh Shilpakala Academy invite classical musicians to perform at programmes, organised once every two or three months. The payment isn’t good either, shared the sitarist.
Firoz Khan, who is a descendant of late Ustad Alauddin Khan, started playing sitar from an early age. He received training under Rajshahi-based late sitarist Lakkhikanta Dey for over 12 years.