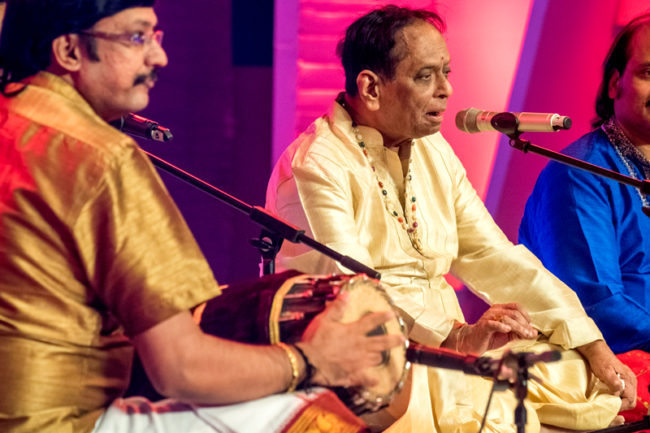 Dr. Balmurali Krishna is regarded as one of the best exponents of Carnatic Classical Music for over six decades. He is an accomplished instrumentalist – known to play the violin, viola, khanjira, veena and mridangam – in addition to being an exceptional vocalist.

Dr. Krishna was the first Principle of the Government Music College, Vijayawada, and the first producer in All India Radio, known for pioneering the broadcast, ‘Bhakthi Ranjani’. He has been known to sing in various languages – including Tamil, Oriya, Marathi, Telugu, Bengali, Kannada, Malayalam, Hindi and French. Dr. Krishna is the National Artiste of India, and a member of the Expert Advisory Committee at Music Academy and an Executive Committee Member of Kalakshetra Foundation, Indian Council for Cultural Research and Central Sangeeth Natak Academy. He was awarded with the Padma Vibhushan, Padma Shri, Award from Mother Teresa, Best Music Director National Award by the 34th National Film Festival, Lifetime Achievement Award by Nungambakkam Cultural Academy, Yagnaraman Life-time Achievement Award, amongst numerous others.