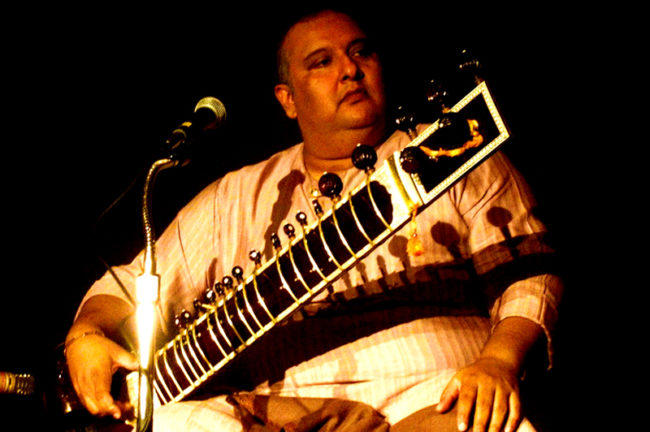 Shujaat Husain Khan is a renowned Indian vocalist and sitar player of the Imdadkhani gharana. He is the son of the legendary sitar player, Ustad Vilayat Khan. His musical pedigree goes back seven generations: Shujaat Khan is the grandson of Ustad Enayat Khan, great-grandson of Ustad Imdad Khan and Ustad Sahebdad Khan – all leading artists and torchbearers of the Imdadkhani gharana with its roots in Mymensingh, Bangladesh.

Khan’s style of sitar playing is known as gayaki ang – a style that aims to imitate the human voice. His approach to rhythm is largely intuitive, fresh and spontaneous. Khan is also widely known for singing folk songs and poetry. He has performed extensively at numerous music festivals in India and around the world. Khan was featured in the concerts celebrating India’s 60th anniversary of independence, New York, Seattle, Dallas, Geneva, London, Los Angeles, Berlin, amongst many others. His album ‘Rain’, with Ghazal Ensemble, was nominated for a Grammy Award in 2004.